Sit! Down! Roll over! Good dog! Good little doggy woggy, what a good little boy (or girl) you are. Huh. Dogs are such simple creatures. Throw them a ball or take them for a walk and they are your friend for life. Or so I thought. Turns out these “simple” creatures are actually quite intelligent and serve a much greater purpose than simply sniffing one another’s…ahem… hineys. I recently read an article in the latest issue of Sierra Magazine and I was so stunned and amazed that I wanted to fill you in on it a bit. The article was written by a feature writer named Julian Smith. He had gone out and learned about this new job for dogs.

Now, in my experience, there are as many jobs for dogs as it would seem there are breeds of dogs. There are companion jobs such as guiding the deaf and blind as well as seizure and allergy alert. Some companion dogs are trained

to bring comfort and a calming presence in hospitals, nursing homes, orphanages, and other stressful situations. Other dogs sniff out drugs, cancer, or bombs. We have all seen the magnificent bloodhounds with their long ears, nose to the ground searching for a lost child. We watched in horrified fascination as dogs helped to recover the wounded and the dead from the rubble caused by the collapse of the World Trade Center towers as well as countless earthquakes and other natural disasters. Dogs work alongside humans to herd reindeer, sheep, cattle, and other livestock. They also protect that same livestock from predators, and alert the ranchers and farm hands of any threat which may present itself. Dogs are also trained to flush and retrieve game. They work alongside police and fire fighters and make the world a better, safer place.

As I said earlier, I read an article and learned of a “new” job for dogs, one that has actually been around for almost 30 years, but is gaining momentum. This particular job takes a very special, dedicated dog, as well as a special and dedicated human handler. The job title is Conservation Canine (CK9). Conservation dogs are trained to sniff out endangered species by finding their scat (feces). Even in water or under snow! Animal scat provides a great deal of information to the researchers. The location of the scat helps them learn how many animals of a given species there are in a given area and how widely they are distributed. Genetics testing can identify individual animals. Hormone testing shows if they are pregnant or stressed. Toxicology testing shows if they are being poisoned. “Scat detection dogs are able to locate samples from multiple species simultaneously across large, remote areas repeatedly over time. Sampling with detection dogs also tends to be far less biased compared to traditional wildlife detection methods (remote cameras, radio-collaring, hair snags, and trapping). No other method can acquire such a vast amount of reliable information in so short a time, making this approach incredibly valuable for conservation planners and land managers.” (Taken from Conservation Canines Website http://conservationbiology.uw.edu/conservation-canines/) 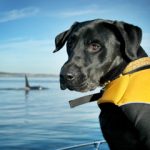 The idea for the use of conservation dogs started in Africa, in Tanzania. Conservation canine director Dr. Samuel Wasser and other researchers had begun extracting hormones and DNA from animal scat. He realized that dogs were an excellent match to locating samples over large areas of varying types of terrain. The Conservation Canine base and training facility is located in Washington, and is part of the Center for Conservation Biology at the University of Washington. Over the past 30 years, the Conservation Canines have worked in remote areas of Canada and the United States, as well as the Pyrenees and Turkey, and Africa. They are trained to sniff out the scat of animals as small as the endangered silverspot caterpillar on Mt Hebo in Oregon and are working from boats in the Puget Sound to sniff orca scat in order to track whale health. The Conservation Canines staff is working toward refining the process of counting bird and bat carcasses at wind farms to make the collected data more accurate and reliable.

Nearly all dogs in the program are rescue dogs, obtained through owner surrender, or found through the Humane Society, Animal Shelters, and rescue organizations. Dogs that make good candidates are considered “unadoptable” because of their high energy and almost fanatical fixation on play and the destructive behavior that goes with it. “A dog that is considered a misfit in the pet world becomes a hero in the conservation world.” (Sit. Stay.Track., Sierra Magazine Jan/Feb 2016) One of the tests the trainers use is to bounce a tennis ball and watch the dog’s reaction, to see if he or she has the ball drive they are looking for. The more important quality trainers look for in potential candidates, however, is focus. All of the dogs are initially brought into the program between ages one and a half to three years old. They commonly retire at about age 8 or 9. While it is not so much a breed as a personality the trainers are looking for, there are some breeds better suited to this line of work. Bloodhounds and other scent-tracking dogs are generally poor scat trackers, while “air scent” dogs such as Labradors, Retrievers, border collies, Australian cattle dogs and Jack Russells have better success. The dogs in the program are very connected to play, and the play (and training) object of choice is a ball. The link between the scat and the ball is established rather quickly, and as the dogs learn more about what is expected, the scenarios become increasingly difficult. Once the dog has learned to detect, usually over the course of two to three months, a new species can be introduced in as little as a day.

When Dr Wasser began the program back in the late 1990’s, he found a narcotic-sniffing course with the help of a master canine trainer from the Washington State Department of Corrections. After completing the course, Dr Wasser

modified the training to more accurately detect scat. His first trial, in Washington State’s North Cascades did not turn up a lot of samples, but did turn up the first sign of grizzly bears in the area that had been found in recent history. A year later, during a study in Canada’s Jasper National Park, the dogs located 30 grizzly samples in one day, and Dr Wasser knew he had found a reliable method of data collection.

Currently, the Conservation Canines training facility in Washington State sits on over 4000 acres of forested land. It provides ample opportunity for the dogs to experience a variety of real-life conditions, similar to those they will eventually encounter in the field. The facility houses up to 30 detection dogs as well as provides permanent housing for the detection dogs’ handlers. Handlers must have the confidence and the ability to read the subtle behavioral signs of their dogs. They must also have the patience to deal with the high-strung nature of the dogs, which makes them perfect for a job such as this. They travel with the dogs year-round, moving constantly from one work-site to another, interacting with different dogs and coworkers at each location. They don’t work with just one dog, but rotate through, depending on the species being researched. “It is more of a lifestyle than a job”, says handler Julianne Ubigau. Trainer Heath Smith states, “Most applicants see this as a romantic job of wandering the national parks of the world with a dog, when in fact it’s 16-hour days with very little downtime and the unrelenting stress of having to be successful. We push applicants to the limits to see how they are going to treat the dogs once they have been camping in 100-degree heat for a month with little sleep, no shower, no internet, no TV.” (Sit. Stay.Track., Sierra Magazine Jan/Feb 2016) Only about a quarter of the applicants make it through the rigorous two-month training. At that point they are ready to take on research projects that may involve cougars, bears, moose, bats, birds, or any number of the countless species found on our planet.

Research is ongoing, and the Center for Conservation Biology works to improve the environment and the habitats of the world’s animals. They connect with the general public through radio, television, and magazine articles, as well as public lectures. Educational materials for students in kindergarten through twelfth grade have been developed and are distributed to classrooms. The dogs are taken into surrounding communities for demonstrations of their skills. The Center is currently developing a community Outreach Education program for retired dogs.

For more information on Conservation Canines and the work they perform, visit their website at http://conservationbiology.uw.edu/conservation-canines/. You can also read more about them in the January/February 2016 issue of Sierra magazine.

Simple creatures? I think not…