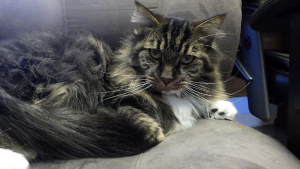 Pull up a chair and let me tell you a story

Greetings to you all.  Allow me to introduce myself. My name is Mostomescu Plavenka. However, you may call me Thomas. I have been in residence at the Bear Creek Animal Clinic for the past several months and have come to fondly call it my home. As a way to thank my kind and wonderful new family, I have decided to give back by writing this weekly blog. I hope to brighten your day with witty stories of my life here at the clinic, as well as enlighten you by posting brilliant and relevant articles each week. Prior to coming to Bear Creek, I lived with a kind woman who met my every need. When hard times befell her, she wanted only the best for me and so left me with my new family.

I arrived shortly after the passing of my predecessor, a (so I am told) delightful spitfire of a gal, Miss HissyPants BadCat.  It is my belief that this “Miss Hiss” as I have heard her referred to, was as small and feisty as I am large and docile. Which is to say we are nearly polar opposites. I am extremely grateful to my kind benefactors at Bear Creek, for taking me in and providing me with a warm window ledge and a soft lap now and then, not to mention the rattling feather-ball, which provides me with hours of entertainment and exercise.  I do however, need to take a moment to voice my displeasure at the nail trimming. That is altogether an indignity I feel should never be imposed upon a cat of my standing and heritage.

What’s that, you say? What standing and heritage? Oh, let me tell you! I come from a long line of kings and warriors. In fact, if it were not for my forefathers, most of the … Wait a minute.  Why don’t you go refill your coffee cup there and perhaps grab a small bite of sustenance? Return and settle in, and I shall continue. You will be amazed at the story of my ancestors.

All set? Coffee warm and in hand? I understand you humans would do anything for a cuppa Joe. That is the correct terminology, is it not? Yes? No? Maybe so? Ah, well, tomato, tomahto. Now, where was I? Oh, yes, I was beginning the story of my ancestry.

Popular belief holds that we felines were first domesticated in what is referred to as the “Middle East”. As humans became less nomadic, and more settled, they grew crops. When there was a surplus of crops, the humans would store them. And then came the mice. And the rats. And the disease. In an effort to curtail the loss of food, and the influx of vermin, the humans found that we cats were magnificent in ridding the storehouses of the nasty little creatures. What began as a working relationship soon blossomed into something much more. The humans needed us, and we found life much easier if we let the humans do all the “heavy lifting”.  I find it intriguing that a simple leg rub and purr will get a prime piece of salmon or chicken placed in my dinner bowl. Or jumping up in a lap will encourage all attention to shift immediately away from the project at hand and become focused entirely on scratching under the chin or between the ears. Purrrrrr….

But I digress. Let’s get back to the real story here…Me!

As I said, popular belief holds that cats were first domesticated in the Middle East. However, I have it on good authority (my grandmeow told me this at bedtime) that cats became cozy with humans in the more northern regions of what is today called Germany, and Russia. Perhaps you have heard of the region of Prussia? How do you think it got its name? It was originally called PurrUssia (Pronounced Purr-us-shh-ow). Humans shortened it because they found it too hard to say with the proper inflection. You try it. Start in the back of your throat, rolling your tongue. That’s it. Now open your mouth and make an “ahh” sound. Good! You’ve almost got it! Now finish with the “shh-ow” sound and you’ve got it! That’s it!  No, you say? Well, just keep at it. After all, Meowsco was not built in a day. Meowsco is the ancient capital of PurrUssia and it took felines and humans working together almost a year to create the magnificent city of sunbeams and scratching posts that was the heart of my mother country.

We lived peacefully with the humans, protecting their grain stores and warming their winter beds, for many years. However, one cold morning just after the first moon of the new planting season, invaders from the west came to the village in which my great-great-great grandpaw, Tomescu Plavka, lived. He was but a young kit, not more than two seasons old. The invaders ransacked the village, burned the storehouses, and kitnapped my grandpaw’s parents. He watched from a hole in the floorboards as his parents were stuffed into a wooden box with slatted sides. The side of the box was nailed shut. He watched helplessly as they were loaded onto the wagon outside. He ran after them, but alas, his legs were no match for those of the horses attached to the wagon. To this day, none of the descendants of those cats go willingly into any sort of box with slats or mesh on the sides. The fear of that long-ago day lives in us still.

With no home and no family, my grandpaw slowly made his way to the coast. He had heard stories of mighty, floating mansions, with unending foodstores of mice and flies and spiders. He decided if he could reach the coast, perhaps he could sneak onto one of those floating things and it could carry him away from the sad memories that tormented his mind and heart. He met many others on the road as he travelled. Some walked with him for a time, but they all seemed to have a destination, a home to return to. Not one of them seemed as alone as he felt. He hunted mice in the fields, and drank from the streams. When he grew weary he curled up in the base of a hollow tree and napped for a time. Slowly, steadily, he made his way across the vast reaches of ancient PurrUssia until he reached the coast. Once there he wound his way southward, looking for the great port city of Felinovska. He had heard stories along the way of great ships lining the docks, all bound for places unknown. As he padded closer to the city, his excitement grew and his sense of adventure urged him forward as quickly as his legs would carry him. Finally, after three months of steady walking, snatching meals and naps, and a few head scratches along the way, Tomescu arrived at the crest of the hill overlooking the great city of Felinovska. Suddenly filled with the energy of a thousand sunbeams, he ran down the hill, heading straight for the docks, to climb aboard one of those giant floating mansions that would take him away from the memories that tormented his sleep and plagued his waking hours with fear.

As he arrived at the docks, he heard men shouting to one another, women calling out for children to come home for dinner. He wandered, wide-eyed, through the throngs of people. Having been on his own for so long, he had forgotten what it was like to be amongst people. He passed a few other cats and they eyed one another warily, but Tomescu kept his head down and continued walking. He was well aware that he was the new kid in town; this was their territory. As the sun continued its way toward the horizon, the docks slowly emptied of people and grew quiet.  Tomescu slowed his pace, looking for a safe place to pass the night. Suddenly a door banged open just next to him. He jumped, hissing and spitting in fear, claws out, and he reared back ready to fight the unseen assailant. A quiet voice lowered his back and smoothed his tail. “Why hello, little kitty,” the voice said softly. “What are you doing out here in the dark all alone? Are you hungry? Want some nice fresh salmon?” As the words penetrated his brain, the enticing smells from inside the door surrounded him. He suddenly realized just how far he had come, and how little mice and spiders contribute to a balanced diet. Slowly, carefully, he inched his nose toward the outstretched hand. Without realizing it, his internal motor started. The soft voice giggled quietly and spoke again. “Come on then, little one. Come inside where it’s warm. How about a nice warm bowl of fresh goat’s milk to go with that salmon?”

Thomas pondering his next idea

Oh, my! Would you look at the time! I see it is nearly time for my wonderful benefactors to bring me my dinner. I don’t want to miss that. Tell you what. We will leave the story here. Seems as good a place as any. I will pick it up again next week. Same cat time, same cat station! And of course, if you would like to ask me questions about my home or my opinion on life in general, please feel free to drop me an email at [email protected] You may see the answer in a future blog!