By lifelearn admin December 2, 2015 Musings and Reflections
No Comments

Esta vida loca. Cette vie de fous. Hanc eandem vitam. Diese verrukte Leben. This crazy life! No matter the language, it all comes down to one thing – life is nuts. From day to day, one never knows what’s around the next bend. And that is what is so exciting! And scary. And nerve-wracking. And amazing. And wonderful. Franklin Delano Roosevelt, the 32nd President of the United States of America, said in his inaugural address, March 4, 1932, “the only thing we have to fear – is fear itself”. Sometimes life sucks. Sometimes it hits so hard one can hardly think about getting up and pressing on. But other times, life is grand and fantastic and mesmerizing. And at all times, crazy.

This morning, as I was telling my girl Cindi all about my night and watching the tree shadows dance in the windy moonlight, a gentleman came in. He introduced himself as Rick. We had never seen him before, and he looked rather

upset. Turns out, he had just moved to Ashland from the East Coast about a month or so ago. He had a kitty and when he let the kitty out this morning for his daily constitutional, the kitty ran around a little just like normal, sat down, and then passed on to the next world. He was only a year and a half old. Now that is just one of those things in life that is completely unfair and wrong and makes no sense. This is a very nice man. I am sure he is a very good catparent. He had a very nice beard, and warm eyes, and the perfect arms and lap for curling up in on a cold winter night, watching TV or reading by the fire. And now, no kitty. It was a very harsh reality. I was very proud of my girl, though. Rick asked her all kinds of hard questions. He said he thought he was doing a good thing, adopting this kitty from the shelter last May. He wondered why something like this would happen, if there was a way to have prevented it. I shook my head, baffled, but my girl looked him straight in the eye and told him that he did a wonderful thing. He gave this kitty a loving home and a bright end to an all too brief life. And likely there was no way of knowing if something could have been prevented. Sure, there were tests that could have been run, ultrasounds and echocardiograms and blood tests, but there was no indication that anything was wrong and so no real basis for running those tests. He had taken the kitty to the veterinarian, done everything exactly right. He nodded, shook her hand, wiped the tears from his eyes, and left. We both had tears in our eyes as he closed the door behind him.

But then, there i

s the flip side. Not too long after this kind gentleman left, a woman called and was over the moon because she had just adopted a new kitten and wanted to schedule her first well-kitten visit. She could hardly stop talking about her new friend. Her soft gray fur and her pretty blue eyes and the little white mittens on her front feet. Her kitten-ish antics, jumping up on the sofa, and then leaping up toward the high back to look out the window and tumbling back down onto the cushions. Her baby paws batting at toy mice. Watching her romp with rainbow crinkle toys dangling from her impish mouth. Chasing milk carton lids under the tables and chairs and back again, only to lose them under the refrigerator.

The holiday season has put me in a reflective mood. I have been thinking a lot about the changes that happen through life. Birth and death, moving, coming and going, momentous life occasions. You humans have lots of milestones that you celebrate. Nearly all of them signify some degree of change. An ending or a new beginning. A child’s first steps, first day of kindergarten. A first trip around the block on a new bicycle, then no training wheels. Driver’s license. High school graduation. Moving day – off to a first studio apartment or a house with friends. A life partner. Celebration of life when life ends. Holidays become something completely different. A chair long filled is vacant. Where once children were underfoot, those children are grown, and in a few years bring children of their own, the vacant chairs are filled, and the cycle starts over.

In pets’ lives there are beginnings and endings as well. For me, I was born in these mountains of southern Oregon. My parents, whom I love and miss, had gone off hunting. We kittens, believing we were sure and smart, wa

ndered off to find food for ourselves, to show our parents what big cats we were. We fell headlong into trouble. Unable to find our way back to our cozy cave, we ended up wandering along a very busy road. We were rescued from certain annihilation by my first human. She kept the three of us, until my sister ran off. My brother and I searched for her, but I heard through the catnip vine that she found another home and was happy as an only cat, spoiled little girl that she is. Alex and I settled back into life with our human. Then I became ill and my human knew with the state of things she could no longer care for me in the manner to which I had grown accustomed. And now I live with the wonderful doctors and technicians and assistants and staff at Bear Creek Animal Clinic. Lots of changes in my short life. Some sad, some happy. But all have made me who I am today, the sophisticated and handsome Thomas the Cat you see before you. 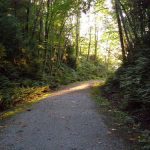 Change is not something to be feared. It can be scary, taking that first step into the unknown, for we really have no idea what is around the next bend in the road. It could be sad, or it could be the beginning of a new and wonderful adventure. It could even be a little of both emotions and more. One thing we know change will bring is growth. Every person we meet, every stream we cross, every mountain we scale makes us stronger. Lao Tzu, an ancient Chinese philosopher and poet, is quoted as saying “Life is a series of natural and spontaneous changes. Don’t resist them; that only creates sorrow. Let reality be reality. Let things flow naturally forward in whatever way they like.”